There's a lot more to selecting a KiwiSaver fund than just checking past returns and fees. If your hard-earned money is invested in KiwiSaver, you need to ask the important questions to understand where and how that money is invested.

What questions are important to Investors?

Note: The following information is taken from NZ Funds Kiwisaver Scheme's own website, fund updates, and the product disclosure statement published in October 2020.

Who is NZ Funds?

Facts & History of the KiwiSaver provider

The manager of the Kiwisaver Scheme is New Zealand Funds Management Limited (NZ Funds).  NZ Funds, founded in 1988, was formerly a joint venture between Lion Nathan and ipac securities.

They have now progressively evolved into being wholly owned by past and present employees. Today, they are one of New Zealand’s largest privately owned wealth management firms.

NZ Funds has a nationwide team of over 70 outstanding investment, advice, technology, and client service professionals, spread across seven offices throughout New Zealand.

The Kiwisaver scheme offers four investment options: three funds (Income Strategy, Inflation Strategy and Growth Strategy) and a lifecycle investment option (LifeCycle). Under LifeCycle, a Member’s investment is automatically allocated across the three Strategies in the Scheme each year based on their age.

Below you will find a link for more information about NZ Funds:

NZ Funds  Management Limited  currently manages 6 KiwiSaver funds and has total Assets Under Management in their KiwiSaver scheme (AUM) of over $270 Million and 9,606 Kiwisaver members as of March 2020.

Who are the people looking after my money?

The investment team, structure and their alignment with clients

James began his career at NZ Funds in 2000 as an intern,becoming an Equity Analyst in 2004. Following a deployment with the New Zealand Defence Force to the Middle East in 2009, James relocated to London where he worked in management consultancy and private equity. James returned to New Zealand in 2015, and following a senior role at Macquarie Bank, returned to NZ Funds in 2017.

How is the Investment Team Structured?

NZ Funds is the manager of the Kiwisaver Scheme. They  are licensed by the Financial Markets Authority (FMA) to be a manager of registered managed investment schemes under the FMC Act. NZ Funds is wholly owned by Investment Group Holdings Limited (IGHL). The beneficiaries of the IGHL Trust are mainly senior management of NZ Funds.

The Portfolio Manager of the KiwiSaver Scheme is James Grigor (CIO). He has overall responsibility for the portfolio allocations and management of the strategies of the scheme.

Within the scheme NZ Funds have different asset classes that are managed by different Investment Managers. Mark Brooks, has responsibility for the Income assets, Dave Wilson for the Global Equity exposures and currency and Andrew Curtayne for alternative assets.

James Grigor has ultimate responsibility for the Investment Strategy and team.

Further, to the alignments of interests of the Directors of NZ Funds,  Chief Executive Michael Lang is not an independent director as he is an employee of NZ Funds and has a material indirect ownership interest in NZ Funds as the beneficiary of a trust.

Other Director’s of the scheme, Gerald Siddall (Chairman), Richard James (Consultant) and Russel Tills (Non-executive Director) are also not independent directors as they have material indirect ownership interest in NZ Funds as they are beneficiaries of a trust.

NZ Fund’s acknowledge that judgments regarding the performance of fund managers and consultants should be made on a time frame that relates to the time horizon of each investment and not on short term performance. Thus, in the short term, the following indicators should be monitored as indicators of continued prudent and professional management:

The performance of each of the Funds’ asset classes will be compared with the returns on an appropriate benchmark index which may change from time to time.

Furthermore, in making decisions on investment strategy for each Fund, the Manager will have regard to the overall circumstances of the Funds and will comply with the Schemes Trust Deed and rules, disclosure documents and with all applicable legislation.

The Manager will manage all aspects of risk in relation to the Funds assets, including:

Below is a link for more information about their Kiwisaver Scheme:

How do I know my money is safe?

All KiwiSaver Scheme Providers must ensure they meet regulatory standards and act with customer interests in mind.

KiwiSaver Scheme Managers must exercise care, diligence, and skill in the investment of scheme assets, and act in accordance with the stated investment policy and objectives. The FMA monitors that KiwiSaver Schemes are compliant with their obligations. Additionally, KiwiSaver Scheme Trustees also have a responsibility as front-line supervisors for monitoring the management and administration of these schemes.

The Supervisor and Custodian of the Scheme is the The New Zealand Guardian Trust Company Limited under the Financial Markets Conduct Act 2013, they are responsible for supervising NZ Funds as manager of the Scheme and holding Scheme property on trust for the Scheme.

A custodian plays a key role in protecting your investments. They hold your money and investments (i.e. keep custody of them) on your behalf. So they are the legal holder of your assets while you are the beneficial and ultimate owner.

The Guardian Trust is the corporate trustee for many of New Zealand's leading corporations, financial institutions, fund managers and banks. Their clients span a broad range of business activities and the quality of their client portfolio reflects their status as a provider of corporate trustee services in New Zealand. As of June 2018, they manage funds in excess of NZ$ 120 billion.

Below you will find a link to a more detailed look into the Guardian trust:

The Manager engages experts to assist in running the portfolios and its investment functions. These may include:

How do they decide where to invest?

The investment processes followed by the manager

NZ Fund’s overarching philosophy aims to provide investors with a financial strategy to achieve their investment goals and regular access to financial advisers to help them make informed financial decisions.

The Scheme is designed to provide Members with access to shares, bonds and other securities including a range of global investment specialists. The LifeCycle investment option is designed to ensure that a Member’s investment is allocated in a manner consistent with their investment timeframe.

Alongside this, they also believe in these principles for their investment approach:

They have policies, procedures, and controls to cover the investment function. Strategy management decisions are subject to daily transparency through their proprietary investment monitoring system. Regular meetings are held to cover investment research and portfolio management, investment guidelines and SIPO compliance, and overall investment governance.

Their  investment strategy review and monitoring process begins with the Research & Portfolio Meeting which includes monitoring of security research and portfolio management. The minutes of these meetings are tabled at the Investment Committee meeting. The Investment Guidelines Meeting monitors compliance with the internal investment guidelines and this SIPO (see below link for more information on the role of the investment guidelines). Any material matters arising from these meetings are raised at the Investment Committee meeting.

The NZ Funds Board meets approximately six weekly. In addition to the Investment Committee minutes and associated reports, the NZ Funds Board reviews NZ Funds' risk register which summarises the major risks and controls (including those related to investment management). The NZ Funds Board also receives a direct report from the Chief Investment Officer at each meeting.

Socially responsible investing (SRI) or Environmental, Social and Governance investing (ESG), also known as sustainable, socially conscious, “green” or ethical investing, is any investment strategy which seeks to consider both financial return and social/environmental good to bring about social change regarded as positive by society.

Basically, SRI investing is investing in companies that have a positive impact on society, based on a number of factors.

NZ Funds is committed to investing responsibly. They have adopted a Responsible Investment Policy requiring that their investment research and management process include consideration of environmental, social and governance (ESG) matters.

As part of their responsible investment approach, they contract with a third party to provide ESG research. They may also supplement this with their own ESG research.

Their Investment Team is responsible for ensuring that no fund managed by them, and no discrete mandate managed on their behalf by an underlying investment manager, holds securities issued by any company identified by their ESG research to be:

The theory is companies that perform well in terms of ESG are more likely to perform well financially over the long-term.

For more information about their  Responsible Investment Policy please see link below :

How does NZ Funds compare to others?

*Past performance is not necessarily indicative of future performance.

*All returns are after fees and before tax, updated 30th September 2020.

It's important to check the health of your KiwiSaver fund and understand its position within the market. Submit the form below to view a simple graphic report of your fund. 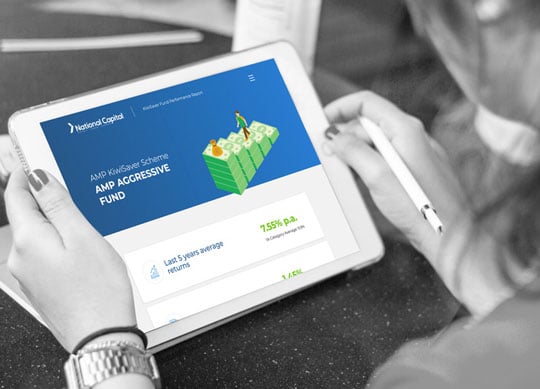 Look at more than just fees and past performance

We have looked at the best performing KiwiSaver funds based on their 5-year returns, however, looking at past performance of a fund is just one aspect when choosing a KiwiSaver fund. Other questions you should be asking include:

Our research team at National Capital looks at over 100+ funds and can recommend the right KiwiSaver investment for you.

Why get advice from National Capital?

Our KiwiSaver recommendations look at the big picture and not just the scorecard. So, what are you waiting for?

NZ Funds KiwiSaver Plan has 6 KiwiSaver Funds. More details on each of these funds can be found in their PDS.